As reported here, the Linux AppImage was broken for version 1.14. The issue has been resolved. So if you weren’t able to run this version, just re-download the AppImage from the Downloads page (the update is also available through the itch.io app).

Just in time for the holidays, Flare 1.14 is now available for download!

The Fireball and Ice Bolt scrolls will now grant players with a buff that replaces their standard attacks (Swing / Shoot / Channel) with the magic projectiles for a brief period. This will hopefully make these scrolls worth their price, especially for Brute characters that lack options for ranged attacks.

Also, Lezaith is no longer completely immune to slow and stun effects. This should help players whose builds rely heavily on those effects.

This is the meat of the update. The engine’s handling of gameplay-related numbers has been overhauled. Values that were integer-only in the past are now stored as floating point numbers, allowing for fractional values. This gives modders a lot more granular control over how they balance their game’s progression. This change also enabled us to implement support for multiplier stat bonuses (e.g. “1.5x Max HP”), allowing for more potential variation in loot.

Also new in this version is support for defining arbitrary “MP-like” resources. This allows modders to have more than one resource pool. It also allows modders to create resources that are a better thematic fit, as opposed to the “fantasy-style” MP/Mana.

The release candidate for Flare 1.14 is now available. For a list of changes, see the release notes.

If you’re interested in helping with translations, be sure to read over the Translations page on the wiki. The string freeze begins today, Nov 17, and ends on Dec 3.

I apologize for being so late on noticing this, but it appears that someone (a bot?) changed the download link on the Android wiki page on March 27. It has now been fixed.

The user who made the change no longer exists. To prevent such things in the future, I have locked wiki editing on both flare-engine and flare-game to only those with push access. If you are not in this group and have a change or addition you’d like to make on the wiki, I encourage you to post it on the discussion forum for review.

Last week, I gave a brief presentation about Flare for the FSFE‘s I Love Free Software Day event. The talk was written with the expectation that a sizable chunk of the audience would be people with little-to-no knowledge of games. So there’s nothing too ground-breaking here. Nonetheless, I think it is a nice summary of what we’ve accomplished over the years.

And be sure to check out the other talks on Godot Wild Jams, Vassal, and Veloren.

Flare version 1.13.04, a small bugfix release for 1.13, is now available for download. Most importantly, this fixes a bug where passive powers wouldn’t activate again after the player had died.

Update: Bug-fix release 1.13.04 is available, so grab that instead.

Flare 1.13 is now available for download. There’s lots of new stuff in this release, so let’s dive in.

Gamepad functionality has been given an overhaul. We’ve moved from using the SDL_Joystick API to using the SDL_GameController API. Instead of trying to map actions to arbitrary buttons and axes, we can now map them to the common XBox 360 controller layout. And thanks to SDL_GameController, these mappings will match up logically for non-360 controllers (e.g. XBox “B” matches Playstation “Circle”). We also fixed some bugs with the analog deadzone setting, including setting a minimum value of 8000. This should prevent players from accidentally setting their deadzone at too low of a value.

The new default mappings are as follows:

Navigating menus with a gamepad is also much improved. One of the most notable changes is the addition of an “action picker” dialog box. When a player presses the Accept action on a selected item or power, the dialog will pop up with a list of all the available actions. Previous to this change, performing some of these actions with a gamepad was either difficult or outright impossible (i.e. dropping items on the ground). And it’s not just better for gamepads. Mobile/touchscreen users will also be able to take advantage of the action picker when interacting with items and powers. 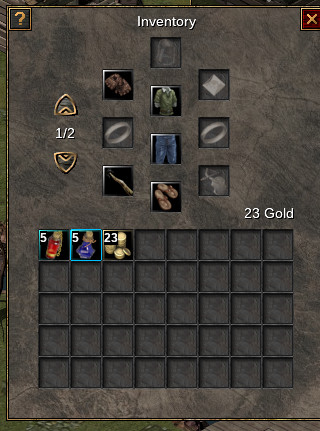 A contributor who goes by r-a-cristian-93 on Github added support for multiple equipment loadouts. We now provide players with two sets of equipment slots in their inventory. By pressing the arrow buttons in the inventory (or the default key, Tab), players can quickly swap between different loadouts of equipped items. For example, players may want a loadout for farming that focuses on XP gain and item drop rate and a loadout for fighting bosses that focuses on physical and magic defenses.

Another contribution by r-a-cristian-93. The fog-of-war feature can be used to draw dark fog over unexplored tiles, and light fog over tiles outside the player’s range of vision. It’s been a requested feature for a while now, but it wasn’t something I particularly wanted to use for the Empyrean Campaign game. What made the feature more attractive to me was the secondary feature: fog-of-war for the minimap. Now, only the areas where the player has explored will be revealed on the minimap.

Text was sometimes hard to read, especially when it involved small font sizes or complex glyphs. By blending text with a copy of itself, I was able to get a much clearer looking result. The effect is subtle, but these comparisons should illustrate the difference:

Health and Mana potions now have Super and Ultra variants that can be crafted through the alchemy system. The Goblin Thief and Alchemist’s Skirt have also been updated to work with all of the available kinds of potions.

The Adept class’ Shield power has been modified to be more useful to players of all classes. Instead of just Mental Damage, the shield’s power is determined by a combination of player level, the Mental stat, and the Defense stat. Of course, Adepts will still be the best when it comes to effectively using the power.

Several problems have been fixed for players on Android. Most importantly, Flare should now work properly on Android 10 or greater.

We also updated some of the packages that we distribute. The Windows version now includes a 64-bit executable by default. The 32-bit executable is still included as a optional extra. We’ve also replaced the x86_64 tarball for Linux users with an AppImage.

Submissions for translation updates are still open until Jan 30. See the Translations page on the wiki if you’re interested.

The first () release candidate for Flare 1.13 is now available. For a list of changes, see the release notes.

If you’re interested in helping with translations, be sure to read over the Translations page on the wiki. The string freeze begins today, Jan 9, and ends on Jan 30.

I’d like to start by saying thank you to everyone for the response to 1.12. I’ve seen nothing but positive comments, which made the long gap between 1.11 and 1.12 feel worthwhile.

Of course, it wouldn’t be a major release without a crash slipping through the cracks. Should you encounter this, the guaranteed workaround is to defeat all the enemies on the map before trying to move to the next map. If I were to guess, I’d say most players do that anyway. Either way, the core issue has been fixed for 1.13.

My goal is to release 1.13 before the end of the year. If you’re interested in keeping track of development, have a look at the milestone issues for the engine and game data.

I’ve also given some pages on the website a bit of attention. The Other platforms & distributions section of the Download page was full of errors. Many of the links were either broken or pointed to an older version of the game. I was shocked to see that the Amiga OS4 port has a “recent” (version 1.09) build! Last time I checked it was still somewhere around version 0.18 or 0.19. I had thought our switch from SDL 1.2 to SDL 2 had killed that port, but I guess there’s no stopping Amiga fans.

Finally, the Other Mods page has been updated with links to the forum threads for the Heresy and Open Valley mods. Heresy is in more of a playable state than Open Valley, which is still very much in development. I do recommend checking out both if you’re curious as to what the community’s been creating with Flare.