Here are four more rings for the collection (click here to view part 1). I think I’ll add in some basic bands and upload the set to Open Game Art.

The Practicality of CC-BY-SA for Game Art

I’ve been going back and forth on some thoughts about Creative Commons licenses for games, especially free/libre games. With license choice there tends to be a divide between ideals and pragmatics. Here’s a link to discussion on Open Game Art.

Let me preface by saying that I think the GPL is a great license, and copyleft is an interesting concept for building community art.

Usually when I release art I choose CC-BY-SA as the license. I’m starting to question whether that’s practical for several reasons.

First, I assume many projects have to just ignore CC-BY-SA art when browsing OGA. Many of our personal FLOSS games have CC-BY-SA art, but outside of our circles it’s probably not very common.

Second, it’s really unclear what the license protects. It’s probable that derivative works only applies to that piece of art, and not the rest of a game’s art. So game engines can likely load CC-BY-SA and proprietary art at runtime. I have no clue what that means for screenshots or video capture of the game engine’s output.

Third, I had this magical idea that my art would be easily reused in FLOSS games, and perhaps I could license the art to other games. But there are few existing FLOSS games that already match the genre and art style I’m creating. So I’d see a much wider audience outside. In the past I’ve given an extremely permissive commercial license for my art — the game owes a small one-time royalty if the game ever grosses $X. It’s just rare for any game to make money though. I haven’t made a cent from these arrangements, which isn’t a big deal for me. I have had good donations though from people using my art.

So I’m really tempted to start releasing everything CC-BY. I figure attribution is an acceptable requirement.

I’m interested in hearing more perspectives. If you use OGA to find art resources: do you have to ignore CC-BY-SA for your project? Do you find attribution too confusing still?

For artists who submit to OGA: ever released CC-BY art that was remixed/updated and the artist did not release those updates? Ever had CC-BY art end up in a wildly successful project with no return thanks? Anyone else make the transition from CC-BY-SA to CC-BY only?

I’m not trying to convince others what they should choose — I’m mainly thinking about my own art and what my goals are. Making money? Wide Reuse? Remixing? Each goal has a preferred license.

This is only a concern for a tiny community, I’d imagine. The Share-Alike license seems to fall short for games. Maybe if my art were a more of a 3D game-ready quality I’d prefer proprietary licenses. Maybe if SA was “viral” like the GPL it would be better for copyleft enthusiasts.

I’ve gone in and updated most of my art licenses on Open Game Art to CC-BY 3.0, except where they contain art from another SA source.

If you’d like to see more CC-BY art released through the Flare project, I encourage you to donate. Also, if you are interested in commissioning new custom art please contact me directly.

Working on some 3D rings to use as inventory icons. I have plans for about 8 rings, but I may add more as I get good ideas.

Several Blender techniques make these easy to create. First there are the Spin and Screw tools. Just create the cross-section of the ring shape and spin it in a 360 degree circle to create the full ring. The screw tool was useful in creating the gold wrap ring, as I was able to twist the ring just the right amount to get the correct shape.

Next is the Warp Transform — I created the celtic pattern and ruby ring cutout on a flat model first, then warped it around the centerpoint of the ring. It’s definitely the way to go when modeling an intricate pattern on a perfect cylinder.

Finally the models use Reflection Maps which give the metals a nice shiny look even though there’s no actual environment to reflect. I’m using public domain landscape photos from Burning Well for the reflections. I’m using a desaturated image for the gold reflections so that the blue sky doesn’t create an unexpected green tint.

I just pushed an update to flare-game that adds new icons and resets the entire items file.

Fair warning: All your delicious loots will disappear if you update from flare-game! This is basically a point-of-no-return for save game files. And expect more disruption to come as we start building final game data.

The item file has been stripped down to the bare necessities. We’re going to test the most basic items before adding back magical items.

The icon atlas has a new layout. It’s organized according to what I expect we’ll need to finish flare-game and add a bit of variety for modders.

Soon I’ll be adding test Absorb values to the new armor pieces. This will greatly increase the total absorb amount available to heroes. Because of this, we’ll have to also increase damage across the board. It’ll just take some playtesting to see what feels fair and what feels like solid progression.

Slowly we’ll introduce unique magic items. As we do so, we’ll be adding any necessary bonus-handling code to the engine.

Now that armor is divided into more slots, we need to introduce new icons to represent all those pieces.

The leather chest and steel chest are carried over from the previous icon set, which were made by Blarumyrran. The new cloth set icons are by Benjaim Schram of CrowLine Studio. The new mage, leather, chain, plate icons are by Justin Nichol. 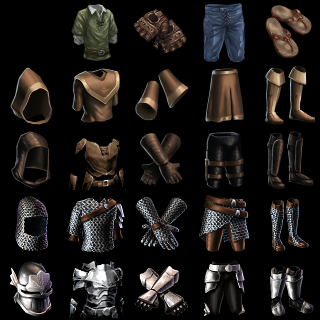 These icons are now released Public Domain (CC0) at OpenGameArt.

Have item ideas for Flare (the game)? Share them in the comments.

Rather than give the same mundane stats to each item slot, I’m leaning towards having an item slot affinity. Boots will tend to have bonuses that affect movement. Example ideas:

Some of these would be harder to add than others, but let us devs worry about that. Better to get interesting ideas than to be concerned about any limitations.

Some sample item slot guidelines. These aren’t hard set rules, and may overlap some with other slots. The general rule: if the total item (description, name, bonus) is awesome then it’s all good.

Throughout the day (week?) I’m going to add some of my ideas to this post.

With the additional inventory slots we added recently, we’ll have to change the scale of most of the combat numbers. Each individual piece of armor can have an absorb amount so the overall numbers need to be higher.

I’m going to switch over to a stripped-down item list so we can figure out what numbers work best. We’ll have to do some playtesting and number tweaking with the base values before we add magical items back into the mix.

Some of the old equipment might not come back. Keep this in mind if you’re attached to a current save file. It’s necessary progress — something we have to do now in Alpha while we still can.

Items that are interesting

When we reintroduce magic items, we will be focusing on fewer but more interesting magic items. Current flare items are mostly not very interesting — they boost a single “random” stat. I’d prefer if magic items each had a strong niche bonus instead. Then we give these items unique names and flavor text to further make them feel special.

Shortsword of Destruction
Increases crit by 4

Last Rites
Deals double damage to Undead
When the Warpriests of Sceleria began their mercy killings, they used these morning stars on the most faithful parishioners first.

We have evolved an interesting system for handling martial and magical powers in Flare. I want to talk about what’s going on under the hood — it’s a major focus of the new code features for v0.18.

Powers cover a wide variety of events — everything from melee attacks to magic missiles to drinking potions. Anything that can be slotted to the Action Bar is a power. But powers are just the definitions of what you can do; once you actually perform a power something new is created — there are two instance types for powers called Hazards and Effects.

Hazards are usually attack powers manifest on the battlefield. They have a danger area (often a point and radius) that is collision-detected against potential targets. Hazards are classified by their movement type: fixed position, missiles, ground repeaters, etc. The “Shock” spell is a missile hazard that is dangerous until it collides with an enemy or a wall. The “Swing” melee attack is a fixed hazard that is dangerous for a single frame, in a small area where the hero is facing. Currently we sometimes use Hazards to display animations on the battlefield that aren’t actually “hazardous”.

Effects are powers that are attached to (and affecting) an entity on the battlefield. This power usage is a new to the Flare engine for v0.18. Self-cast buffs like Shield or Warcry are effects that attach to the hero. Attacks that cause debuffs to the target are now also handled via Effects — the Freeze spell applies a Slow after-effect. Multiple versions of an effect type can be active at once, each with a distinct animation. Example (though we don’t have these animations built in yet) — you can be Immobilized by a Bear Trap that’s visually attached to the hero, and also Immobilized by an Entangling Roots spell that’s also visible on the ground. The power icon associated with each Effect is shown in the active buffs/debuffs HUD menu.

Because all these are different states of a basic Power, it’s now much easier to expand powers to add new types or variations.

First, have a look at these potion renders. It’s fun to mess around with higher quality art that could be used in later games:

Though this work is fun, it’s making me seriously think about realistic graphics in games. I think games aim for realistic art run the risk of either (A) taking way too much time/effort/funding to get it right or (B) suffering from a lack of art direction. Not to mention the related effects of “Uncanny Valley” — as art approaches realism our brains only focus on the missing details.

I’ve been wanting to start creating sets of “realistic” isometric tiles at 1m scale, to be highly reusable in free/libre projects. But will that actually be useful? Is it a foolish goal? Should I find a distinctive art direction and make tiles that have a specific style instead?

I was thinking it might be interesting to add Tarot Cards to some kinds of Action RPGs — maybe as collectables, or quest items, or spell components. Rather than commission a set, I found this old Public Domain set from the 1700s. They’re awesome and creepy! I cleaned them up a bit and uploaded them to OpenGameArt. 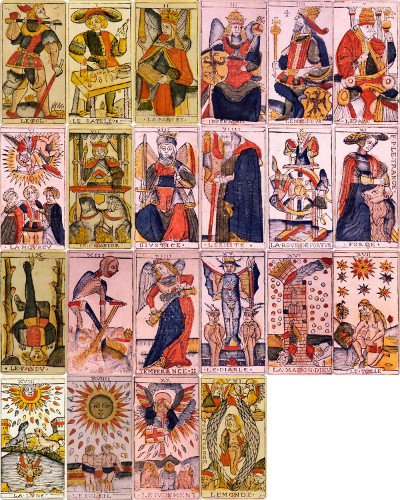