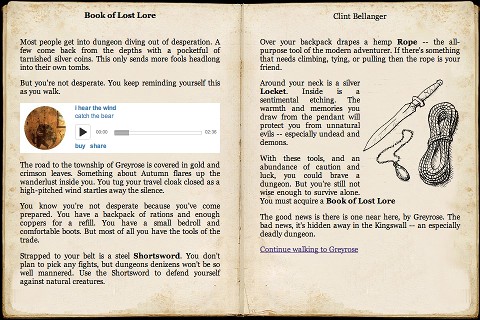 My February #onegameamonth project is called Book of Lost Lore. It’s a chapter of interactive fiction (much like Choose Your Own Adventure). The story is that of an aspiring adventurer in a dangerous fantasy world.

My main gamedev skills are programming first and 3D modeling second. This project uses neither of those. Instead it’s basically all writing. I’m not great at writing so this was good practice that I’m hoping to put towards Flare.

If you’re out there and aspire to be a game designer/writer but you have no programming or art skills: here’s an example of a game type you can make on your own, right now.

I want to send out special thanks to catch the bear (Matthew Ohlendorf) for allowing the use of his songs from the album “down to sea in ships”. I’ve been listening to his work often this month and it only felt right to put his music directly into the book.