Flare’s current alpha art (called “fantasycore”) is limited. If you’ve been following the blog you know that we’re working on higher scaled art. In the current art each tile represents about 1.5m x 1.5m; the new art will use 1m square.

With everything being about 150% larger, we need to put a lot more details into models. So most of the old art can’t simply be rendered upscale. That’s okay though — we’ve learned so much in the last couple years that we can create much more polished work. 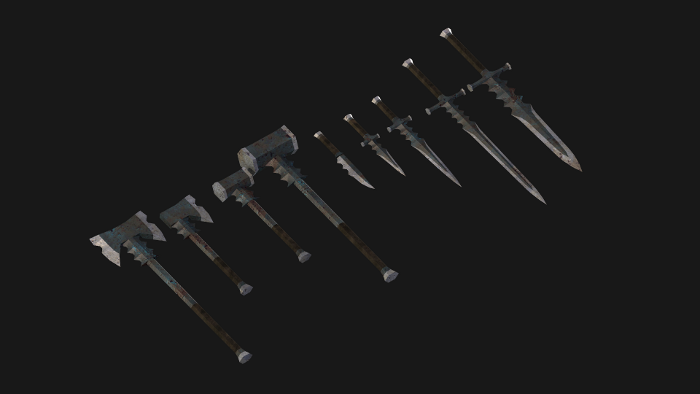 Here is a preview of some new Iron Weapons. It’s mostly me playing around with a theme set of weapons (those serrated edges, the two-tone metal). Some thoughts about the designs:

We’re also experimenting with better light setups and more frames of animation. Here you can see the iron longsword in the hands of the new male hero model. I like the back light and hope we can make it look correct in game.

It’s rendered at 2x scale (128×64 base tile size). It holds up, and is actually a decent size on a 1080p display. I’ll be pushing for all of the new art to look nice at this scale, and most likely we’ll allow the entire game to be played at this resolution.

Is there a point to having so many similar melee weapons? They might not matter much in the current implementation, but we’re working on ideas to make a variety of melee weapons interesting. For instance, we could give all swords a bonus to parry; all hammers a bonus to stun; all axes a bonus to bleed.

I plan on experimenting with weapon attack speeds; though it may be done with a handful of fixed speeds (slow, medium, fast instead of a continuum of speeds). That brings a nice dimension to weapons. Big slow weapons would be useful for efficiency, as you’re putting out similar DPS for less MP spent. Small fast weapons would be useful for triggering procs more often.

And it’s more interesting to see a variety of drops and visual looks on the hero. Right now in fantasycore we went with the bare minimum equipment to get the engine going, but we can have fun expanding the set of weapons later. With the introduction of many different sets of weapons we can add a more interesting weapon progression. Instead of linear upgrades based on size (dagger, shortsword, longsword), we can have a full suite of weapons every few levels (with updated materials or themes). Currently you need 4 Physical to use a longsword; in the future you might need 14 Strength, 9 Dexterity to use an Obsidian Katana.