Check out the Wyvern at OpenGameArt. 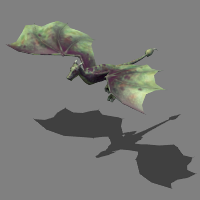 The large wyvern actually looks fun, but there are a couple issues. First, it’s hard to aim missiles at adult wyverns because of how high they are in the air; collision code assumes impacts happen at the ground level. We might have to tweak some code to make that feel correct. Sort of the same issue with missiles coming from the adult wyvern, but perhaps that can be fixed with different kinds of power animations.

I merged the new Behavior interface code from the working branch into master. A couple things were obsoleted (“patrol” code removed in favor of A*), and some things need to be re-implemented (particularly the new power triggers, which need to be addressed slightly differently anyhow).

Expect bugs at first, but the new cleaner code should allow us to easily identify and fix them.

Version 0.16 isn’t ready. It’s potentially not far off though. Depending on how things go (and perhaps what gets cut), we might release a few weeks delayed. Here are the remaining must-have features: