Flare has taken the back burner while real life stuff has been out of control. It happens.

This week I plan to pick back up on this grassland tile set. My next big concern is making sure the tile shapes are usable. I plan on having high cliffs and low water; but, Flare’s maps are currently flat. So all the split levels will be faked, essentially. Tiles should be easy to place and work with the existing grid.

What I plan to do is make a proof-of-concept set of tiles and then see how they play out in Tiled. If the basic shapes work, it’ll be easier to move on to textures. I’d rather do that than put a lot of work into the textures, only to find out the shapes don’t fit together.

I was really hoping to be able to fake split-level areas: terraced elevations that look like different heights but are actually flat and faked with forced perspective. But it looks like it’s too tricky to deal with. What I’d gain by forcing this, I’d lose by making the tile set much harder to create and work with.

Actually the tile set art will still be friendly to such an engine, but it just isn’t quite working here. I’d need to add n layer support and drawing tiles in vertical order first. It just isn’t necessary at this point, but would be a nice thing to consider for a future version of Flare.

So I’ll have to do basically the same thing I did in the Cave tile set. In the Tiled version of the tileset image I had to flatten the water areas to work in Tiled.

Raw cliff test. Not too bad, maybe the rock layers are a bit too defined. I can make some changes so that they smooth more in some places. 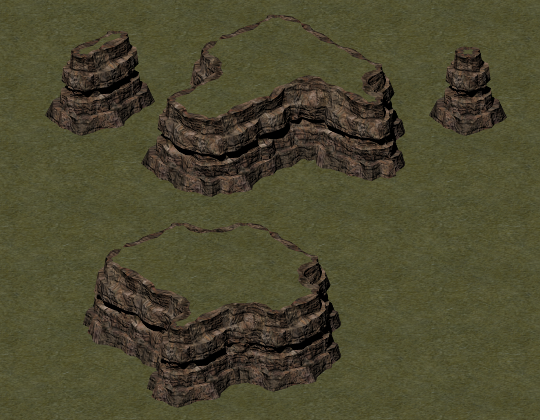