I made some grass and water tiles before, but I don’t care for the way they turned out. Using particles for grass seems gives me a very noisy grass, and it’s difficult to deal with the translucency on the edges. I’m going to try to make new grass that relies more on good textures.

I want to add small cliffs. Some will just run along a grassy area to give the illusion of a split-level floor. Some will lead down to water. I’m trying to draw inspiration from the Cliffs of Moher — look at the texture on those vertical cliff faces. I’d like to accomplish something like that if possible.

Because of the way tiles work in Flare, the cliffs won’t be extremely tall. This might lead to a terraced look in some areas. Maybe that’s a good, interesting thing. We’ll see how it turns out.

I’ll be trying different techniques. I want the result to be relatively low-poly and perhaps useful in 3D games. I might need to use some combination of sculpting, 3D outlining, and good textures to get it working correctly. I also need them to tile seamlessly. Going to be tricky, but I think I have the work flow figured out. It will be similar to what I did with the cave walls, but with more manual modeling instead of using random Fractal subdivision.

Trying out some textures and basic shapes for the cliffs. This is only one tile repeated. Just experimenting to see if this gets me anywhere near where I’m trying to go. I’ve zoomed these in at 200% so the detail is easier to see. 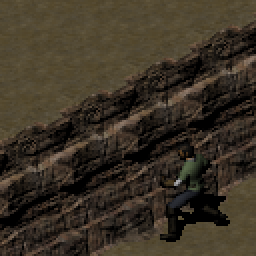 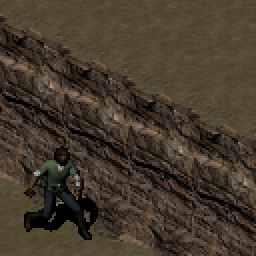 I dunno. Maybe. The angle of the light kind of washes away the details on the right side. It could look good given more variety.

I’ve found an easier way to get this variety on the cliffs, with a better-looking result. 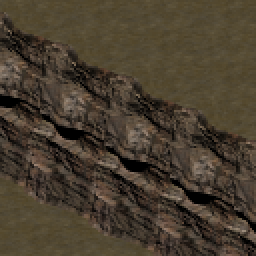 Before I was trying to subdivide and extrude chunks of rock. This time, I vertically subdivided the section into 10 parts and shifted the curves of each horizontal rock layer. It’s a lot faster than the previous method. I ended up with more faces but it’s still not a lot (this example is 117 quads/234 tris per section).

For kicks I might tone down the poly count to 64 quads, to be extra 3D-game friendly.