[Polymorphable is the first released total-conversion mod/game for Flare. Here’s a plug and some great background info from its creators. -Clint] 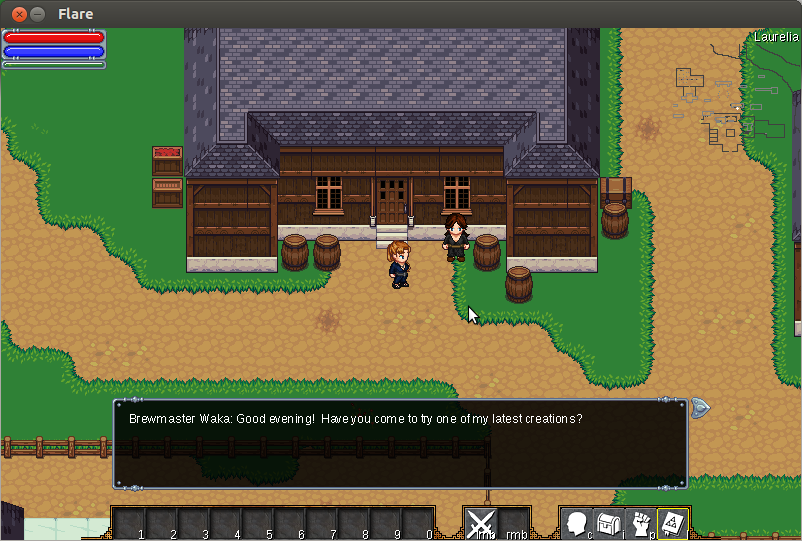 On the eve of her 16th birthday, Polymorphable’s protagonist, Daphne, unwittingly unleashes an ancient evil on her town. It is therefore her responsibility to make things right, and discover a little about herself, her parents, and her village along the way. The primary game mechanic is centered around the FLARE transform power – as she progresses through the game, Daphne acquires four transformational talismans, to turn her into a bat, snake, ghost, and the powerful Juggernaut. Each has it’s own special abilities, to fly, pass through fire, spit acid, or strike down a screen full of enemies, and is necessary to progress through the dungeons. The dungeons currently include a cavern, a volcano, a haunted castle, and a snowy peak (it’s amazing how much geography there can be around one single village!). In total, there’s probably about an hour worth of gameplay here right now, but the modularity of FLARE make it easy to expand that content, and plans are already being hatched for it. Maybe in a couple of years we’ll have content to last for twenty hours!

Polymorphable (full name Laurelia’s Polymorphable Citizens) is a coming-of-age adventure game designed for the Liberated Pixel Cup contest. The mechanics take from the FLARE engine, the level design is inspired by the first Zelda, and the narrative genre derives from SNES JRPGs like Dragon Quest and Secret of Mana – a young girl, just coming into arbitrarily-defined adulthood, discovers she has a destiny to fulfill.

Along the way, making/modding this game, I’ve had a chance to really get a feel for the FLARE engine – I came in after the 0.15 release on the Ubuntu app store, and then made a small mod with a few npcs, a couple quests, and some modded enemies. After asking some rookie questions, and receiving some great answers, I felt a little more comfortable with the engine. When Thane Brimhall asked me to work on Polymorphable for the LPC with him, I jumped at the chance.

And man, I obsessed over that for a month. Nothing really brings the power of the FLARE engine to light like trying to design a whole new game from the ground up – and whenever I see more features being added in FLARE, I start trying to think of the new possibilities they unlock. It’s also exposed a lot of the ways that FLARE can be improved for modders, which has probably generated a ton of work for Clint and the FLARE dev team. I think that the best advice I can give modders is to try and insert as much as you can into every aspect of your own mods – it’s the best way to learn how to leverage all that the engine can do! I think it also offers me a chance to give (hopefully) constructive feedback to the FLARE team as to what works, doesn’t work, and could be added to enrich the engine. I know several features got fast-tracked or added by two amazing FLARE devs, Justin Jacobs and Igor Paliychuk, so that we would be able to make the game we wanted.

Overall, I cannot thank FLARE enough for making something so flexible and powerful!

I’ve been quite interested in the LPC ever since it was announced, and since I’m a long time fan and dev of Flare, it seemed natural to want to figure out a way to use the game engine I was comfortable with. Most of the work I did on Polymorphable actually happened before the coding portion of the event started. Key components I worked on included creation of the new UI widgets and adding orthogonal tile support to Flare’s map renderer (and fixing associated bugs).

Once the coding portion rolled around, we were armed with new art and a shiny new map orientation. I created the first tileset and built out Laurelia, the city Daphne lives in. But after that, real life came into play, and I was pretty much out for the rest of the month. I was really impressed with the amazing efforts surrounding the project! Matthew Krohn, Justin Jacobs and Igor Paliychuk really picked up the ball I dropped and cranked out a great game.

Naturally, with only a month of work put into it, there’s a few places that are rough around the edges, but I’m amazed that a good story-driven game can be produced in such a short amount of time. We plan on enhancing Polymorphable over the coming months and years to make it into a polished (and longer) game.

The real amazing thing behind Polymorphable and the Flare engine that deserves recognition is the flexibility that it grants game-makers. At first glance it’s unlikely that players would ever realize that Flare and Polymorphable run on (99.9%) the same code base. Hopefully, this will open the floodgates for many more Flare-based games in the years to come.